One of my housemates fell in love with Elliot Smith my sophomore year of college. For the better part of a semester, “Say Yes” played on repeat in our dorm. Somehow, I didn’t really listen for another three years until I picked up his album “Either/Or.”

Soon after, I found myself listening to “Say Yes” endlessly on repeat. (I wore earphones).

At merely 2 minutes and 19 seconds, I consider “Say Yes” a nearly perfect song. If you’re a songwriter, it’s also a great song to nab chord ideas from. I’ve talked about Elliot on the blog before, but here’s the thing, if you happen to take the time to watch this very blurry interview, you’ll learn a couple of things.

Chord Flow kind of splits the difference between music theory and exploration. I think of Say Yes in four sections. Let’s check them out.

What do the songs “The Weight,” “Friend of the Devil,” and “Whiter Shade of Pale all have in common? Besides being about fifty years old, they use descending bass lines. (Descending bass lines get called a lament bass from time to time. I like that name).

Elliot Smith uses one in the verses of “Say Yes.” They’re easy to create. Choose a major scale, then move the chords backward through that scale. Here’s a G scale:

Here’s what a lament bass often looks like in G:

These are the exact chords of The Dead’s Friend of a Devil; the only difference is the notes start an octave higher:

Elliot also uses this bass line in the verses of “Say Yes.” There are just a couple of differences. He changes the Am chord to an A major chord (officially outside of the key of G, but we don’t care about that).

He also ends the bass descent on the A major chord (instead of the G) and then hangs on it for two bars. That gives it a brash, bright kind of sound. It creates a kind of spotlight. And it sounds great.

After a few rounds with the descending bass, a little palette cleanser is good. Elliot provides this by hitting us with Axis of Awesome chords in G (and that A major chord again).

Here’s the Axis of Awesome in G: 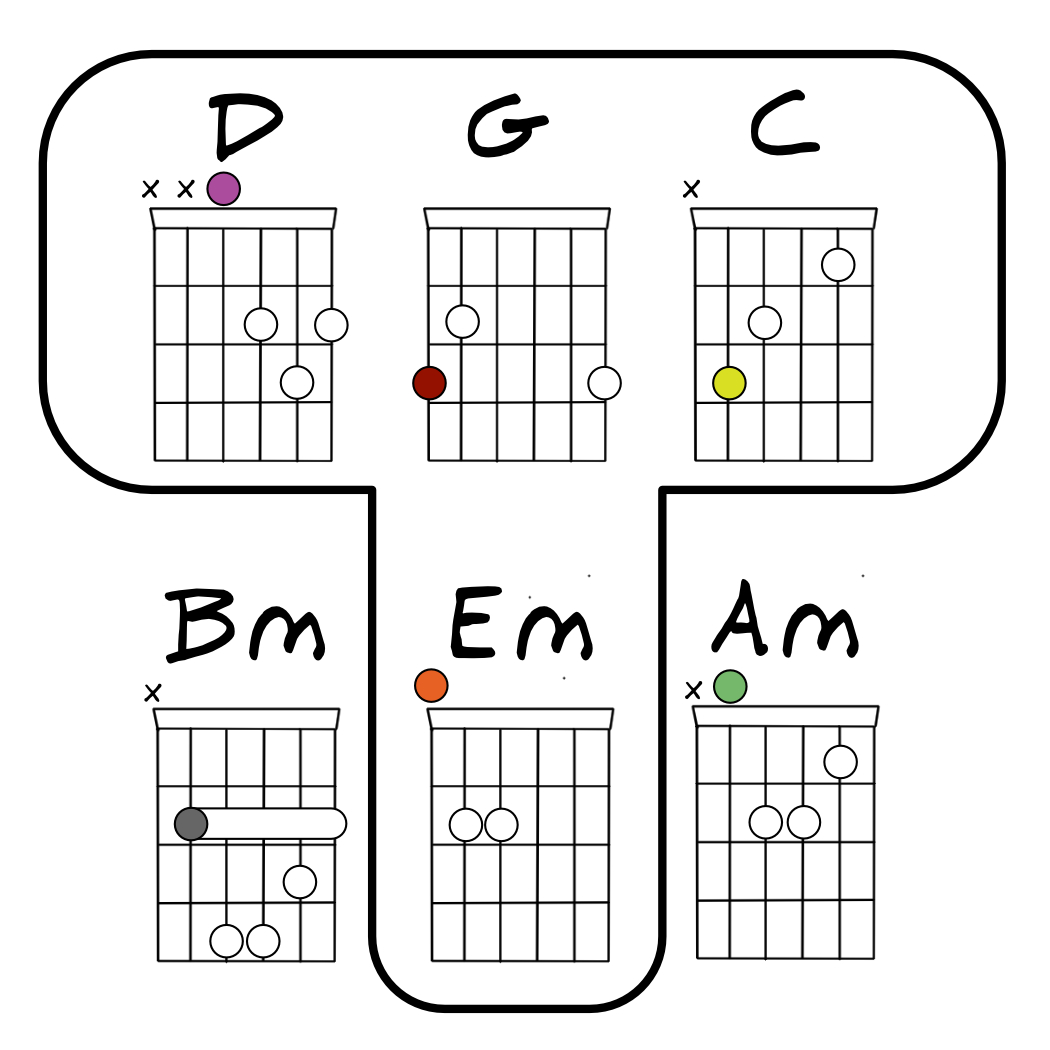 The B sections progression goes:

The Bridge of Say Yes uses one of my favorite tension-building chord techniques.  It sits on the same chord and raises one note in that chord one fret at a time.

Most of the time in Chord Flow, I use colors in the chord charts to emphasize the bass notes of chords, but I’ll highlight the fret-wise movement of notes with color in the next couple of chord charts.

Honestly, I’m pretty lazy. When I play, it looks a lot more like this:

This fret-wise movement inside a chord is another classic “trick” songwriters use. I’ve looked at it before in Bowie’s “Life on Mars,” though if you want to check out another song using the same progression, you could listen to the chorus of “Save Me” by Aimee Mann.

Elliot runs through this progression twice in the bridge. The first time builds up to the G7 and then moves backward through the progression, landing on a C major chord.

The second time rises and falls through the same progression and lands once again on . . . the A major chord:

The final part of the bridge is the song’s apex, and it revisits the descending bass idea from the verses.

The first difference is Elliot uses an F chord instead of a G/F# as the second chord in the progression and proceeds to Em as usual. The F major chord sounds darker and more angry compared to the G/F#. The progression then jumps to a C chord but uses C minor instead of C major. There’s a kind of pained sadness to how the C minor chord hits. Then the song returns to the first verse as an outro.

That is officially a lot of stuff, especially if you haven’t run into some of these tricks before. It’s good to remember that while Elliot certainly knew and could describe a lot of the theory he used in his songs, he rarely approached it from the direction of theory. He said, “It’d be a drag to have to do battle with conventions all the time. You can kind of be imaginative with it.”

Elliot also said, “I think it’s pretty easy if you just relax and quit thinking about what you think other people want to hear.  If you can just keep finding things, and just things that you personally like about music, put it into the blender and, you know, see what comes out.” And, “If you like it, there must be something good about it because you liked it, right?”