I got into something of a foofaraw last weekend. I posted my blog Chord Flow: Darkness and Light to a Facebook group and the first commenter said: “I don’t get it. This is just the Circle of Fifths.”

Soon another commenter chimed in: Root movement by fifths is one of the most fundamental elements of common practice harmony. . . “Chord flow” seems like old wine in new bottles.

And finally, I was told: [Chord Flow] IS music theory . . . it’s a bit audacious to try and rebrand music theory as your own system.

This made me a bit defensive. The point of the blog is to offer a window into music principles without the numbers and jargon of typical music theory. If that puts some people out, so be it. I’ll be the Grinch Who Stole Music Theory. (I never thought anyone would much mind it was gone).

To be fair, these commenters were pretty thoughtful and well-mannered in their critiques, and their comments have helped me think a bit more deeply about what I do. They also bring up a  good point. I could talk about the Circle of Fifths again. (I talked about it here, and here, and here too, but that was a while ago, and my blog can be hard to comb through.

Said another way, I think most music teachers emphasize musical grammar at the expense of encouraging students to speak. That’s not how we learn a language, and music is a language.

Anyway, here’s a diagram of the Circle of Fifths I grabbed from Wikipedia: : 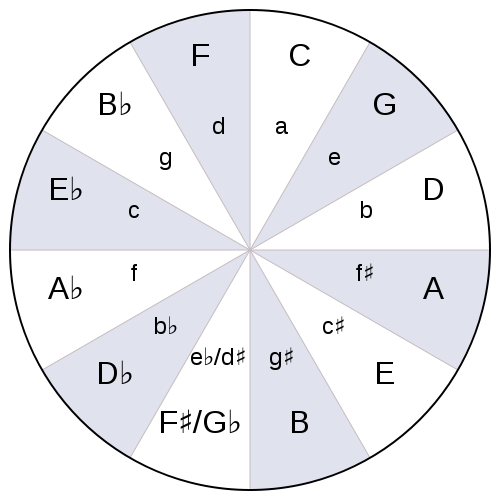 This is a Chord Flow:

Chord Flow focuses on the pattern B E A D G C F that you’ll find starting with the B and moving counterclockwise around the wheel. (The phrase BEAD Guides Chord Flow is the memory tool I suggest to help remember that pattern). Neighboring chords in this pattern sound good together.

A Chord Flow could use minor chords as well. Again, neighboring chords sound good together:

Chord Flow is a way to understand the relationships between chords for songwriters and guitarists. It’s also a window into music theory without the numbers and jargon. Here are some ways to play with the Basics.

Chord Flow doesn’t require you to understand musical keys to play around with it, but it can also help you better understand the relationships of chords within a key. Here’s how Chord Flow organizes keys.

Chord Flow can also help you understand the relationships between related major and minor chords, allowing you to substitute chords for each other. Here’s how Chord Flow helps you ACE chord substitution.

You might notice that the Circle of Fifths has some sharps and flats on it, and Chord Flow doesn’t. Armed with a capo, most guitarist songwriters might never need major or minor chord forms outside open chords above. I’m not saying you shouldn’t learn more chords, just that you can do a lot with these chords and a capo. If you want to add flats to Chord Flow repeat the BEADGCF pattern on the right with flat chords:

Lining things up this way makes it easier to see how notes and chords should be named. Any seven notes in a row are the correctly** named notes of a key.

The Circle of Fifths does do a better job of showing “enharmonic notes,” notes that share the same tone but could be called sharp or flat depending on what key they are in.

*3a. I believe that once people understand the simple bits, they may become genuinely curious about the complicated parts, which is preferable to conscripting their interest in the subject.

**I recognize the irony in wanting things to be named “correctly” after dispensing with the formal language or music theory. Everybody has their pet peeves.

2 thoughts on “Chord Flow and The Circle of Fifths”