In “On Writing,” Steven King points out that sentences don’t have to be that long. A noun and a verb are enough to get the job done. As a jokey example, King uses, “Plums Deify!” Here’s a better example for songwriters. “Love Hurts.”

Love Hurts was first recorded by The Everly Brothers, but it has been covered by approximately everybody. The band Nazareth’s version is probably best known, but there are versions by Cher, Joan Jett, and Roy Orbison. Jim Capaldi of Traffic made a disco version. I thought I’d heard the song enough in my life, but I tried listening to the Gram Parsons and Emmy Lou Harris version a couple of years ago. Then I put it on repeat and didn’t stop listening for the rest of the night.

Yesterday I spent some more time with it. First, I looked at the chords, which are largely, you guessed it, Axis of Awesome Chords (in the key of G). That’s G, Em, C, and D. Axis of Awesome chords can support a great song, but do they make a song great? Nope. So what’s this song got those other songs don’t?

Sure, love is wonderful, but no one’s going to deny that love hurts like hell from time to time. Songwriter Boudleaux Bryant had the guts to write it down. There’s something to a two-word (two-syllable) sentence, Love Hurts, as a vessel for truth as well. It doesn’t get much more straightforward.

With their songs Love Stinks and Love Bites, J. Geils and Def Leppard successfully riffed on the theme. But love isn’t the only thing a writer could use the power of a two-word sentence with.

When I started writing about Love Hurts, I thought I would only talk about the chords and call it a day. Then I started thinking about the two-word (two-syllable) sentence as a vessel for truth and wondered; “Are there other songs that use this technique?”

I’ve given away the answer, but then I wondered, is there anything else the songs share in common? There is! The lyrics of all the songs I’ve mentioned moor their truth-vessels at the 4th and 1st beats of the songs they’re in. 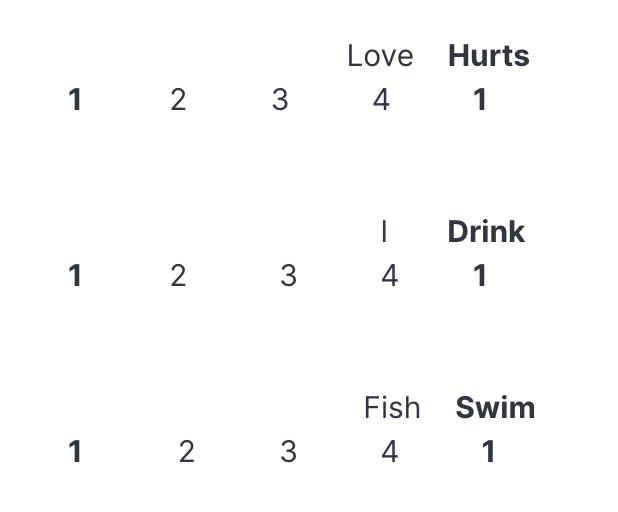 The one beat is the strongest beat* in a song and works like a spotlight. What gets spotlighted? The action (or verb) in each truth-telling two-word sentence.

What does love do? It hurts.

What do fish do? They swim.

Pat Pattison has a whole theory of how the placement of a phrase can affect its meaning, but a quick rule of thumb is that ideas that land on the one beat convey a sense of truth, importance, or honesty. Do you want to ruin the song Love Hurts? Move the hook to a different beat. You could do the same thing if you want to find out where that phrase starts to sound less than honest.

*I talked about strong and weak beats in a song when I looked at Falling Slowly a few weeks ago.